Rosie’s Pizzeria and Sports Bar owner Phillip Viviano prepares a pizza as part of the restaurant’s Pizza Forward campaign. The idea to surprise community members with free pizza originated with the KHS Class of 1978 at their 40th reunion.

DIAMONDVILLE — Ding Dong! As the doorbell rings, you may wonder who’s at the door. Is it a friend, family member or a long-awaited package? No, it’s your friendly neighborhood delivery person from Rosie’s Pizzeria bringing you a fresh hot pizza that someone has gifted to you through their Pizza Forward Campaign.

The idea originated when the Kemmerer High School Class of 1978 held their 40th class reunion at Rosie’s this summer. Restaurant owner Phillip Viviano waived the rental charge for the party, which gave reunion coordinator Suki Hess an idea.

“Let’s use this money to send pizzas to community members,” Hess said. “Let’s say thank you to those who make a difference.”

The project from the Class of 1978 was a great success and Viviano wants to keep it going.

“There is always room for more giving,” Viviano said. “Something’s been lost in today’s society, and we are trying to get it back. We loved Suki’s idea and we will keep it going.”

Hess and her classmates wanted to show appreciation to those community members that rarely get recognized — the janitors, school cafeteria workers, senior citizens, single moms and dads, the neighbor who shovels your walkway, or friends who could use a pick-me-up. They realized it was time to take better notice of the people around us that we take for granted.

Viviano acquired Rosie’s Bar back in February of 2016 with the intention of expanding into a pizzeria. Before the sale to Viviano, Rosie’s had been operated by the Kalan family for more than nine decades and is the only one of out of 13 original bars built in Diamondville to survive into the 21st century.

Pizza, food and family runs through Viviano’s veins. His great-grandparents owned a pizzeria in California after his great-grandfather returned from WWII.

When Viviano looks back, he remembers his mom and grandmother were always in the kitchen. Whether it was making bread or homemade pasta, they were always cooking something and they always shared what they had.

“It’s been a dream for me to own a pizzeria,” Viviano said. “I love seeing people eat and seeing the smiles on their faces as they sit at my table.”

Viviano is taking things back to the good old days, when the only way to make anything was from scratch. People used real ingredients and made good, wholesome food.

“I believe you need to have an authentic product,” Viviano said. “We are doing things right. We cook using only high-quality whole ingredients.  It allows the natural flavors to come out.”

The hand-tossed dough at Rosie’s creates a crisp crust that delivers a satisfying snap, while the special blend of cheeses topping a light layer of house-made tomato sauce will send your taste buds to happy land.

Like most construction projects, there were plenty of delays in making the Rosie’s pizzeria dream a reality.

There is a tremendous amount of history in the building, and Viviano wanted to keep the feeling of nostalgia but bring modern conveniences.. Sparing no expense, Viviano even shipped an original double-deck Blodgett 1000 brick oven from the east coast in order to transform Rosie’s small family kitchen into a first class commercial pizzeria.

Rosie’s Pizzeria made its debut at Oyster Ridge Music Festival in July. It was the first time locals laid eyes on the new pizza in town. Their booth sold out as fast as they could make the pizzas that day. Local residents got their first taste of a traditional New York-style pizza pie made with love from scratch at Rosie’s new kitchen in Diamondville. But the yeast in that pizza dough wasn’t the only thing that rose in the kitchen that long summer weekend. Generosity, kindness and hope rose in the hearts of many community members that day. 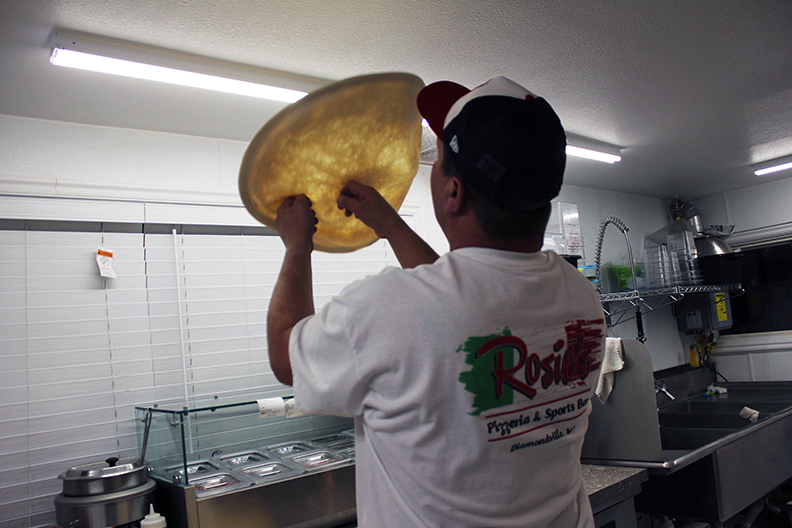 Phillip Viviano prepares a traditional hand-tossed pizza at Rosie’s. Vivano said Rosie’s wants to continue the Pizza Forward campaign started by the KHS Class of 1978 because it is a great way to give back to the community and recognize each other for our hard work and kindness.

Remember the scene in the movie How the Grinch Stole Christmas, when the Grinch finally realizes he can’t stop Christmas from coming? All the Whos in Whoville were singing for all to hear, even without any presents or decorations, It was then the Grinch discovered the true meaning of Christmas and his heart grew three sizes that day.

Well, the heart of Rosie’s Bar grew ten times its size because of the creation of the Pizza Forward campaign. As the KHS alumni chose potential recipients for the inaugural Pizza Forward Campaign, something was rekindled within those walls.

Rosie would never miss a chance to  serve a warm meal to a tired miner or sneak a candy bar to the kids at the back door. Her kindness, generosity and old-fashioned caring created a legacy of giving back to the community that the Pizza Forward Campaign has reincarnated.

Even though Hess now lives far from Diamondville, she continues to fuel the campaign.

“I am planning to continue to order pizzas from time to time,” Hess said. “I am looking forward to surprising many more. I’m also hoping people get the message and join the movement.”

As holiday season is upon us once again,  it’s good to reflect, gather and share our blessings with one another as we prepare for a new year ahead.

“My greatest accomplishment is that I have been blessed with the opportunity to give others an opportunity,” Viviano said. The owner said the Rosie’s expansion has helped create more jobs and a place for people and families to gather and share food with each other.

“Someone did it for me when I was a kid,” Viviano said. The pizzeria owner shared with the Gazette how he ran away from home at 17 and dropped out of school in 10th grade. It wasn’t easy, but he worked hard and never gave up. Viviano also admits he has a rough-around-the-edges exterior, but it’s how he’s learned to survive and succeed.

Vivano’s attitude is reminiscent of Rosie Kalan’s reputation of a gruff and tough exterior, but never failing to lend a helping hand or offer a safe haven for someone in need. She would be proud to know her legacy is alive and well and growing.

Viviano is proud to continue the Pizza Forward program because it is one more way of giving back. “It’s not about the pizza,” Viviano said. “It’s about giving, caring and sharing.”