Two candidates for Wyoming governor visit with the Gazette

Throne said her experience as a Wyoming state legislator would help her make change as governor if elected.

“I was in the state legislature for 10 years, and I felt like my last few years we were making decisions that were keeping us at the fate of the boom-bust cycle,” Throne said. “I think decisions in Cheyenne should move us forward.”

The Democratic candidate said she was also motivated to run when she saw Wyoming politics she thought were too closely resembling D.C. politics.

“We weren’t working together as well as we have in the past,” Throne said. “I don’t care if an idea is a Republican or Democratic idea, a liberal or conservative idea; if it’s a good idea, we’ll work with it.”

Throne said Wyoming has a history of electing the person, not the party.

“In our state’s history, when we’ve had a Democratic governor and a Republican legislature, it really forces us to find the best solutions regardless of party.”

“We need to change how we pay our bills,” Throne said. “Transparency is the buzzword, but it’s meaningless unless the government really tells people what’s going on with the budget  so we can plan for the future.”

Throne addressed how, as governor, she would help keep Wyomingites in the state —especially a millennial generation that tends to leave for education or jobs.

“I think you can look at groups like ENDOW and the Engage council and really look at the ideas they’ve come up with,” Throne said. “Young people, and all people in our state, want good jobs, healthcare and schools. We need to create those opportunities across the state."

Throne said the state needs to foster an entrepreneurial climate.

“We’ve had a flat budget as a state for a while — one that’s not fair or sustainable,” Throne said. “Local government is starving for revenue, and as for where to find it, that’s just math and a lot of good discussion. 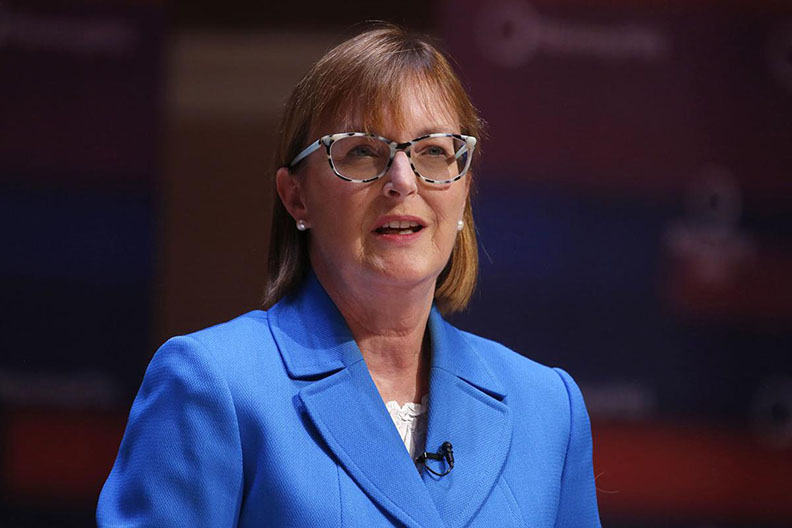 “We would need to slowly increase the bottom two tiers on the tax structure so as not to shock the system,” Throne continued. “We can also look at a tourism tax, which frees up money for other things. We have to have conversation; we can’t just tighten belts. Because really, what else are you going to cut now?”

Throne said the revenue report (which will be released on Thursday) should show that the situation of the state’s economy is not as bad as it was in the past few years.

“That doesn’t mean we can be complacent,” Throne said. “We need to implement incremental changes. As governor I would work toward a new tax structure to work with our economic future, not our past.That will take a lot of discussion, but I think we can create a structure that’s fair, equitable and competitive.”

Throne said she was in Kemmerer during the summer’s Tour de Wyoming bike race.

“What a great way to market the state,” Throne said. “People learned that we have great schools and abundant outdoor recreation opportunities, so we should capitalize on that.”

Throne said her background as an energy attorney would help her govern and help Wyoming’s energy economy.

“In the legislature, I was on the forefront of our carbon capture legislation,” Throne said. “We’re always looking for new opportunities with coal, but we need to recognize the challenges it faces.”

Throne said sometimes residents may look at her party affiliation and come to a false assumption that she does not support coal.

“I made my living as an energy attorney,” Throne said. “I have those ties that can help our energy industries continue to prosper and move forward.”

But Throne said the state also needs to be realistic in recognizing the limits and challenges of its energy resources.

“The state has an obligation to help prepare counties like Lincoln County for the possibility of things going wrong,” Throne said.

Throne grew up in Campbell County. She said that when the energy business began to boom, the county had no way of handling the drastic change.

“We had strong leaders like Ed Herschler and Mike Enzi who really helped with that,” Throne said. “We need a focused effort by the government or the business council to help communities plan, so that the county and the energy workers and retirees are not left high and dry when the economy of a county changes so suddenly.”

Throne addressed the recent Westmoreland bankruptcy announcement as an example of the need to help Wyoming counties plan for the future.

“We can’t bury our heads. We have to learn from outside expertise and look at how economies in other states have dealt with these issues,” Throne said. “I would actively work with companies like PacifiCorp to ensure our energy economy has a future.”

“Medicaid expansion would help our rural hospitals and people across the state,” Throne said. “Right now we’re essentially paying for that population’s health care twice. That uncompensated care shifts the cost to the rest of us.”

Throne said state-wide support for Medicaid expansion in the past has not passed because of partisan reasons.

“We can look at other states that have rural areas similar to ours, like Montana and Colorado, and see that Medicaid expansion has been great for them,” Throne said. “It’s been great at addressing mental health issues and detecting cancers. As a breast cancer survivor, that’s an issue that’s near and dear to me.

“If someone has another idea to fix our broken healthcare system, tell me what it is,” Throne continued.

“Wyoming has a history of a very accessible governor,” Throne said. “That’s been true under Gov. Mead, and I would continue that tradition.

“Cheyenne can sometimes be a bit of a bubble,” Throne continued. “As governor, I would want to see the quality life increase across the state, and I would visit with people to learn how to do that.Kemmerer, Diamondville and Lincoln County are great communities in our state,” Throne said. “The people here need to know that whatever happens, the government has their backs.”

Republican candidate for Wyoming governor Mark Gordon stopped by the Gazette on Tuesday, Oct. 23, to talk about his campaign.

Gordon discussed how his experience as state treasurer would transfer to the governor’s office if he were elected.

“I love the state,” Gordon continued.“I entered this race because my hope is that I can make Wyoming and the world a better place”

Gordon, who grew up in Kaycee, and his family are lifelong ranchers.

“My goal is for Wyoming to have a really robust economy firing on all cylinders,” Gordon said. “In order to keep people here, a governor has to make sure the jobs are here and the trained workforce is here. We have the resources and expertise to make that happen.”

Gordon said that as governor, he would focus on transparency to help Wyoming residents understand the state budgeting process and learn where revenue comes from.

“That will take a little more work,” Gordon said, “But we can show people what happens when we borrow from ourselves and what that really does to our earning value.” 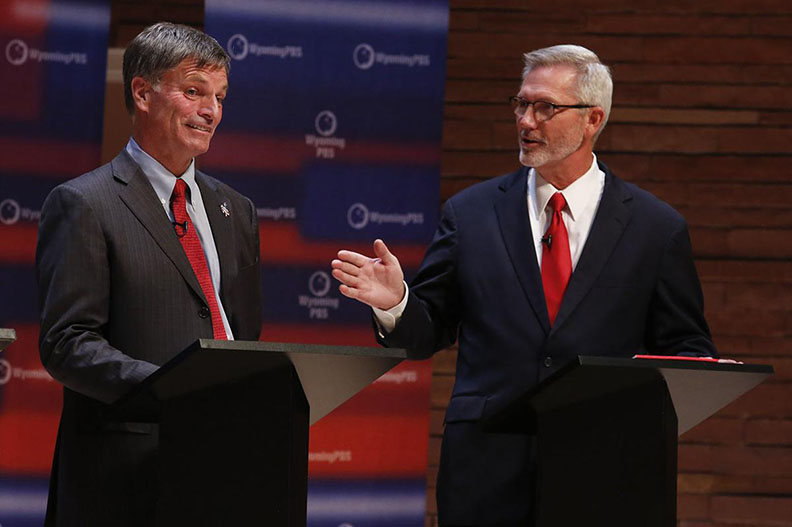 Gordon discussed what a focus on Wyoming tourism across the state could do for the state’s economy.

“We have these crown jewels in the northwest of the state —Yellowstone and Grand Teton,” Gordon said. “We need to get people to spend more time in the rest of Wyoming.

“The rest of the state is absolutely beautiful,” Gordon continued. We should encourage tourism in our historic towns. I think we should do our best to incorporate Wyoming-made products (agricultural and otherwise) so that people have a little piece of the state to take home with them when they leave.”

Gordon said he would focus on three industries as governor of the Cowboy State: tourism, agriculture and energy.

The Republican candidate for governor discussed how he would protect Wyoming’s energy economy and lead it into the future.

“As treasurer, I have encouraged my colleagues and people across the nation in an effort to stop talking about a future without coal, and start talking about what we need to do to make sure coal has a future,” Gordon said. “We know that carbon capture will be a piece of whatever we do in the future.”

Gordon said he would be the right kind of leader to talk about solutions for adapting and improving the state’s energy economy.

“I’m optimistic that fossil fuels are part of the solution,” Gordon said. “We could have a manufacturing future because Wyoming leads the way in developing coal technology and products.”

“I want to keep our education system strong, because there’s no better place than Wyoming to raise kids. I have the leadership and work ethic to make that happen,” Gordon said.

Wyoming is in the middle of an education budget crisis.

“We massaged this issue a lot, and no silver bullet emerged  in the legislature or the treasurer’s office,” Gordon said. “We have to achieve a balance by looking at our permanent mineral trust fund. It’s going to take a shift of income to set us up for long term in a better way.”

Gordon said his experience serving on a school board would enable him to work with local school boards as a governor to identify savings on a local level.

Gordon said that, as governor, he would work with the rest of the state’s elected officials to make sure they were all on the same page in making positive change.

“So much goes on in the governor’s office that we need to make sure we’re being transparent across the board,” Gordon said. “I think Gov. Mead has done a great job of that. A governor needs to be out in the state more on a deeper level, in order to meet with people and have those conversations. The governor should act as connective tissue for the state.”

Gordon referenced the national praise his treasurers’ office has garnered for transparency.

“I would love to see that transfer to the state,” Gordon said.

Gordon said he would work to better inform residents about everything that goes into the budgeting process. Gordon discussed the state’s wide variety of economic diversification efforts.

“As governor, I would want to streamline those efforts so they’re more efficient, less bureaucratic, and can produce more measurable results,” Gordon said. “Like our energy efforts, I would want to pull all those together in one energy office to promote the welfare of our state-wide energy economy.”

As the general election draws ever closer, Gordon reflected on his campaign and what he has learned visiting residents across the state.

“I feel like a lot of the governor’s campaign has been focused on how Wyoming is going through a tough time,” Gordon said. “But the amount of optimism Wyoming citizens have is reassuring. They don’t want government to fix everything, they just want government to work. That’s a commonality across the state.”

“As a Republican, a government that’s closest to the people is the best,” Gordon continued.  “Every community should have the resources they need.”